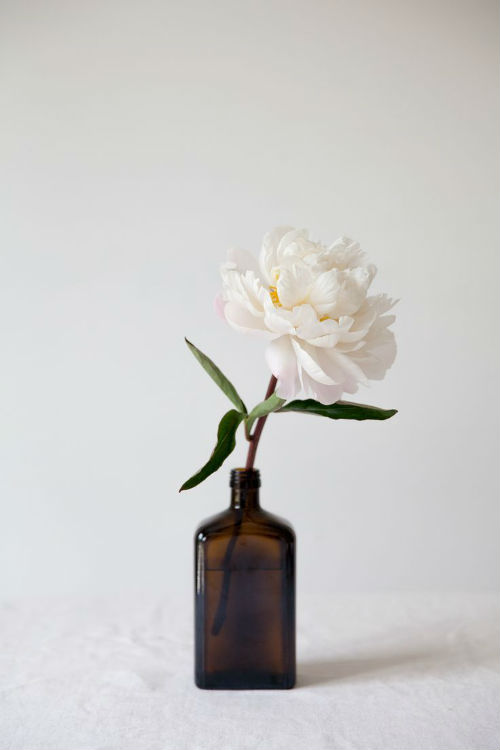 June, the month of glory, where the humble yet majestic peony embosses every Instagram post of every girl who needed something new to signify she’s alive and of this earth. After posting the crocuses (to symbolize the thaw), the tulips and daffodils (oh, here comes spring), and an ever so brief dalliance with the sakura (cherry blossoms), the peony signals the acceptance of spring’s growth and the anticipation of a brief, thigh sweaty summer.

She was a peony once, tight and furled into herself. New. Next to her was a bud, attached at the junction that leads to the root, growing alongide her, together but apart. The sun kissed them, the rain fell hard upon the pair, but they weathered the storms as best they could. It’s not easy being exposed, some buds have stronger stems than others. They kept each other company, laughing at the silliness of alliums around them, and just as they felt lonely in the space they occupied, two tiny ants appeared.

She, without thinking, fed them and in turn, they pollinated her. It was exhausting, but rewarding, giving the these little-legged creatures room and board. They were ceaseless with their demands. But without them, as June waned into July with a great celebration, she would not have become as beautiful as she realized she was that day. She would have remained closed in the bud, failed to bloom fully. They occupied her petals, forcing her to open wider than she could have imagined. Their efforts, their relentless crawling all over her, their quiet naps in her folds, helped her to blossom. They chose her  she needed them to survive

Her best bud, however, refused to open. He wanted to stay outside as long as possible. He did not want anyone to notice him, lest he be cut down too early and taken indoors. He did not mind the epic rains of that June, they cleansed him. He convinced himself he was happiest alone anyway. Oh sure, he enjoyed the ants. They helped him to find calm. But he was completely uncomfortable with how passersby to stop and smell the blossoming flower he was attached to. He despised her social media success, her showy display. He found it confusing that she seemed to get energy from the appreciation, that she enjoyed her minor celebrity status. They were so different, he thought, how could this possibly work?

He began to pull away, to stay tighter within himself and reveal nothing but his pain and distaste for her. After a particularly windy storm, she began to feel the weight of it all, began to feel herself drooping, dropping petals. The time spent trying to make herself smaller and to contain her beauty, dull her fragrance, make herself invisible—so as not to make him leave her—became unsustainable. She knew what she had to do to survive. The season was almost over for her, but she still had a shot. She woke up one day, conscious of the need for a bud to love her for who she was, to appreciate her awesomeness, to be co-pilot on her quest for life’s beauty. Someone to hold her up and support her during the torrential spring rains that flooded basements and created lakes in parking lots. But first, she knew she had to learn to stand on her own.

She said her goodbyes and cut herself down, liberating herself. It was painful as fuck, but eventually she graced a dining room table, the centrepiece for family conversations, present in the moments that mattered. She knows she is wilting and that the ants will soon abandon her, in search of toast crumbs hiding on the unswept kitchen floor. But for now, her pollen is enough to sustain them, and their company enough to sustain her.

Maria Callas is a pseudonym View all posts by MariaCallas

Hi and welcome. This is a site where I write random musings and essays about my life, living with a face that everyone says gives me “character.” I realized recently that not every human sees their nose in the landscape when they look out at the world. But big-nose girls do. I thought this would be an interesting vantage point to write from. Not all the stories here will be about honkers, I’m also newly out of a relationship that spanned two decades and dating for the first time in my 40s. It’s also a place to celebrate huge beaks in an attempt to challenge what we see as beautiful. I’m on a journey of self-discovery and I’m gonna be really raw about it all in this space. Enjoy!